A thousand fantasies
Begin to throng into my memory,
Of calling shapes, and beck’ning shadows dire,
And airy tongues that syllable men’s names
On sands and shores and desert wildernesses.
John Milton (1608–1674), Comus. Line 205. 1

Deserts are commonly considered to be empty and barren wastelands, devoid of life, cultural significance and aesthetic value. This brief extract by the English poet and writer, John Milton, hints at the evocative sounds, lights and shadows, exotic forms and topographies of the desert. Australia’s vast semi-arid spaces (including ten deserts 2) that compose 70% of the Australian mainland, are characterised by poor soil, droughts and infrequent flooding rains. Yet they boast an impressive biodiversity and many spectacular ancient geological formations that are an ongoing source of inspiration for Pippin Drysdale. The artist explains that landscape ‘is all about colour, whether subtle and soft or vibrant with contrast’. 3 Drysdale never aims to accurately reproduce a scene, but rather captures fleeting moments in an intuitive manner, and celebrates her passion for the structures, colours and memories of the Australian ‘outback’ that is her birth place and home.

Drysdale tends to work obsessively with intense bursts of production lasting several months, followed by periods of rest and travel. This allows her to constantly evolve and imagine new series. The Devils Marbles Collection, made for this Biennale, similarly marks an exciting departure in Drysdale’s oeuvre. Graceful vessels have transformed into sensuous, voluptuous ‘rock’ forms. Created on the wheel, delicate alterations in the throwing process have transformed the individual vessels into unique sculptural entities. This series is also rooted in Drysdale’s recent shift from displays of single pots to installations of groups of vessels. The resulting aggregated form enabled her ‘to expand her thoughts on place and time…’ 4
Three groups of works, ‘Break of Day’, ‘Meridian’ and ‘Evensong’, constitute Drysdale’s Devils Marbles Collection. They pay tribute to the popular Northern Territory landmark, Karlu Karlu / Devils Marbles Conservation Reserve, that is famous for its scattered round granite boulders which vary in diameter, from 50 centimetres to six metres. The 48 porcelain forms that constitute Drysdale’s installation engage with a fresh, comprehensive and daring colour palette that evokes surreal and ‘magical’ desert light effects. Luminous and dramatic sunsets, opalescent cloudbursts, the intense pigments of primordial geological strata; shimmering desert mirages, and iridescent flashes of indigenous birds, provide some of the intense nuances that are transcribed by the artist. Drysdale’s dazzling installation captures Australia at its most wildly beautiful; soft, glowing pastels alternate with blazing golden and brazen crimson tones, offering spectators an alluring, seductive, and enigmatic liminal experience.

Acknowledgements
For many years Drysdale has worked in collaboration with ceramicist, Warwick Parmeteer, who throws her forms. 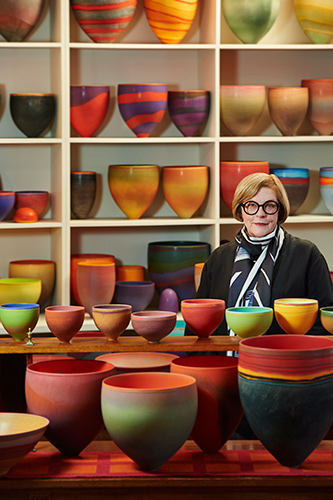 • have spent a significant part of their career working within or creating work related to Western Australia;

• are highly regarded and skilled in their field;

• have spent their careers constantly developing their work;

• have passed on their knowledge to other artists and influenced emerging artist to their field; and

• have demonstrated a commitment or contribution to the arts sector in Western Australia.

They were selected, based on the above criteria, by a panel of distinguished members of the arts and culture community in Western Australia. (photo featured in West Weekend Magazine)

Pippin Drysdale is an award-winning ceramic artist based in Perth who is renowned internationally for her large, intricate works inspired by the patterns and colours of landscapes around the world.

Pippin was born in Melbourne in 1943 and grew up in Perth from the age of three. Born into a wealthy family, she was a rebellious child and flitted from school to school, finding it difficult to settle down or embrace traditional education. Art was the only subject that allowed Pippin to express herself and she took private classes in painting and drawing as a child. After leaving school, Pippin worked as a typist, spent time as a secretary in Canberra, worked odd jobs in England for a year and travelled through Europe. Her life was filled with “magnificent” adventures and parties.

She returned to Australia in the early 1960s and moved to Melbourne where she married and had a son. It was in Melbourne that Pippin first sold her art, creating Mexican paper flowers and selling them through local stores under the moniker Pip’s Flowers. She moved back to Perth in the early 1970s, settling into a cottage in Fremantle that she still lives and works in today. On her return, she became interested in herbs and natural remedies, and by 1973 had built one of the biggest herb gardens in the southern hemisphere. She harvested and sold the herbs to outlets around Perth for a number of years.

It was through a relationship with a potter who made ceramic structures for Pippin’s herbs that she found clay.He built a kiln in her backyard and Pippin began to experiment with clay, creating small bowls and goblets. After their relationship broke down, Pippin became serious about clay and enrolled in an Advanced Diploma in Ceramics at Perth Technical College. She spent three years under the tough but impressive direction of teacher David Hunt.

Following the course, Pippin undertook a Bachelor of Fine Arts at Curtin University of Technology in 1986. It was during that period that Pippin discovered her love of creating large, open, “womb-like” porcelain vessels and began experimenting with the style that she is now renowned for today. Upon finishing her degree Pippin travelled to America and spent time at the famous Anderson Ranch Art Center in Colorado, developing her craft alongside revered international artists. After returning to Australia, Pippin threw herself into work and her pieces were soon regularly exhibited around Australia, Europe and collected by major galleries around the world.

She discovered a need to work thematically and many of Pippin’s series are influenced by a journey. She draws inspiration from the colours and textures of landscape, and her emotional interpretations of place and space are injected into each of her pieces. Pippin focuses in particular on the vast, diverse Australian landscape and has created series based around the patterns and colours of the Pilbara region, the eastern Goldfields, the Kimberley, and the Tanami Desert. She has also travelled overseas to draw inspiration from the dips and peaks of Pakistan, India, Russia and Italy.

To date, Pippin’s work has been exhibited in over 450 solo and group exhibitions. She is incredibly committed to her work and is constantly pushing herself to a higher standard, her perfectionism reflected in her ambitious works. In 2007, a major survey exhibition of Pippin’s works was held at John Curtin Gallery, a testament to an impressive two decades. It was at that point that she began to develop closed form pieces that she refers to as the “male” pieces to accompany her open, “female” works.

In 2008, Pippin was named a Master of Australian Craft by the Australia Council for the Arts. The following year, she undertook a residency at the New York City Department of Cultural Affairs. In 2010, her Tanami Mapping I exhibition was opened by Ambassador to the USA, Kim Beazley at the Embassy of Australia in Washington DC. In 2011, Pippin received a Lifetime Achievement Award from Artsource.

Pippin is grateful to still “wake up every day with a challenge” and believes that she found her identity through her work with clay. She is currently working on a new collection called The Pilbara Series, which will be exhibited around the country in late 2015.

Pippin lives in Fremantle and is constantly searching for her next gem. 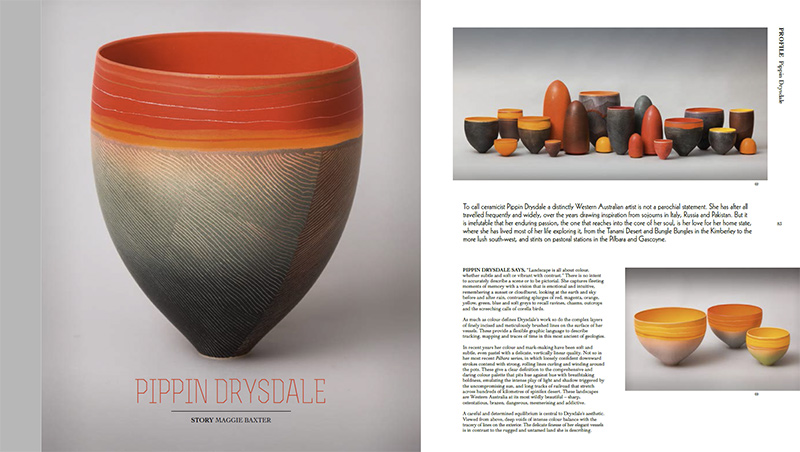 I want to introduce The Somatheeram Ayurvedic Health Resort - this is the most wonderful place for your health, I have been going to India for treatments for 16 years - this medicine has kept me alive and healthy. I can highly recommend this most magical plac,e you arrive feeling terrible and leave feeling wonderful - don’t hesitate to send me a note but once you have seen the videos you will be hooked. Tell them I recommend you and they will look arter you. email:Pippin Drysdale

The US Ambassador in Australia, Ambassador Bleich, his wife, father-in-law, and the Consul General visited Pippin Drysale's pottery studio on August 11, 2011 which is located in a 120-year old limestone cottage in Fremantle. Pippin is currently working on a series entitled "Desert Crossing" that will be on display in Boston in December 2011. The Ambassador and Mrs. Bleich met Pippin at the July 4th celebrations in Canberra earlier this year. 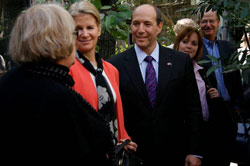 Pippin Drysdale welcoming the US Ambassador
and his wife, father in law and the US Consul
in Perth. 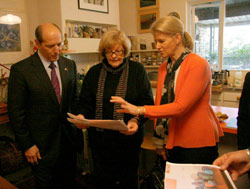 Ambassabor Bleich and his wife look over the
plan of the installation for the Boston exhibition. 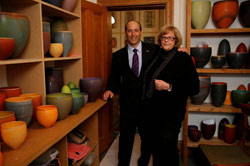 The Duke and Duchess of Devonshire have acquired 3 major installations for the Chatsworth Collection UK. >>visit Chatsworth website 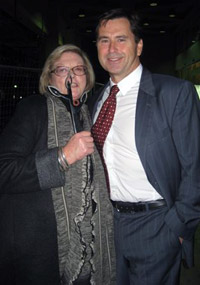 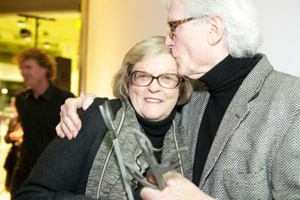 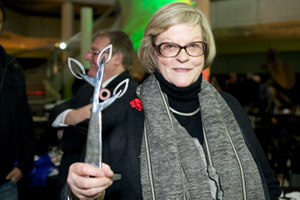 The awards, presented at the Art Gallery of WA on May 25th 2011 by former AGWA and National Gallery of Australia director Betty Churcher, seek to honour WA artists who have been practising visual arts with an international scope for more than 30 years.

Artsource launched the Lifetime Achievement Awards in May 2009 with the expressed intention of paying respect to artists who have sustained their practice achieving excellence in their chosen field for over 30 years. The annual Awards are just one way to acknowledge the rich contribution of artists in our community, at the same time as developing greater pride within the art sector. Previous Award winners are Nalda Searles, Hans Arkeveld, Shane Pickett, George Haynes and Stuart Elliott. (Artsource) 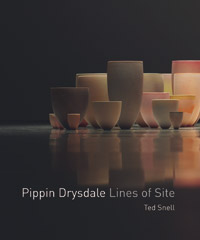 - Ted Snell
Celebrating the work of the respected ceramic artist...

About the book: A major monograph on internationally renowned ceramic artist, Pippin Drysdale, written by Ted Snell.
Pippin Drysdale: Lines of Site, situates Pippin within Australian and international visual culture of the last half century.
The book is beautifully illustrated with over 60 colour and 40 black and white photographs of Pippin's works and working practices. It will be launched in tandem with a major exhibition of Pippin's work at the Curtin University Gallery.

About the Author: Ted Snell has contributed to the national arts agenda through his role as Chair of the Australian Council of University Art and Design Schools, Chair of Artbank, Chair of the Asialink Visual Arts Advisory Committee and as a Board member of the National Association for the Visual Arts and the Biennale of Electronic Arts Perth (BEAP).
He is currently Chair of the Art Craft Design Special Interest Group (ACDSIG) of Museums Australia and Chair of the Visual Arts Board (VAB) of the Australia Council.
Ted has published several books and is also a visual artist with his work represented in many public and private collections including the National Gallery of Australia, the Art Gallery of Western Australia and Artbank.
Pippin Drysdale: Lines of Site will be available in June at all good book stores.
It can also be purchased online @

Renown artist Pippin Drysdaletalks about her work as a Ceramic Artist from her studio in Fremantle Western Australia.